What is position in physics?

If we want to describe the motion of an object, we measure the position, distance, velocity, and other such parameters of the object.
The position of a particle in physics is the place where it is being placed. Generally, this place can be located on a number line when the motion we are studying is in one dimension.

A reference point or origin is defined as a fixed point or fixed object with respect to which the given body changes its position.

Here in the above figure O is the origin. This position is the starting position of man. Values to the right of the origin are positive and to the left of origin are negative.
Now at t equals to 5 minutes the man is at 10 m from the origin. So, point A in this figure gives the position of the man at this time.

Now he starts moving towards the left and at t equal to 8 minutes he is 5 m from the tree or origin. This position is represented by point B.

The position of man can be negative in the sense that if he keeps moving towards the left crossed the tree and is at 4m towards the left of the tree. At this time \(t = 15\) minutes his position is represented by point C on the line which is negative.

For more information watch this video on position, distance and displacement. 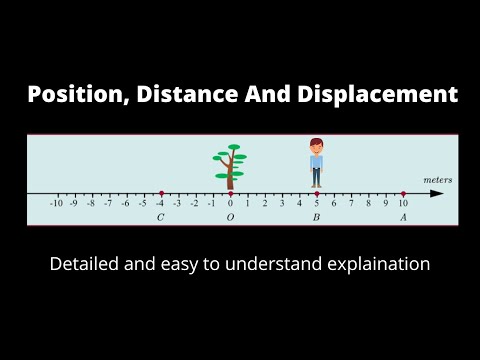