This article is about charging by friction or rubbing. We already know that electrical charges are a fundamental or natural property of a fundamental particle and that there are two types of charges, namely negative and positive charges. There are three ways in which electrons are transferred to charge the object, and they are

What is charging by friction? 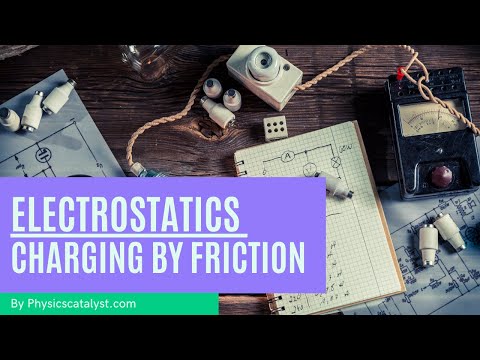 Rubbing, as the term suggests, is pushing two objects back and forth toward each other. The best way to feel the electrical charge is to rub those bodies together. Rubbing or friction allows electrons to travel. This gives a positive charge to one substance and a negative charge to the other. Charges remain on the surfaces of the products until they can flow or discharge. Whenever there is friction between materials that differ in their ability to give up or gain electrons, the electrons can be transferred in this manner, i.e. through friction.

Similarly, there are many other materials that are electrically charged when they are rubbed against each other for example, when we rub the woolen cloth with ebonite or very hard rubber rod, then woolen cloth becomes positive and ebonite rod becomes negatively charged.

The interpretation of the presence of the electrical charge on the rubbing is clear. Material bodies consist of a large number of electrons and protons in similar numbers and are thus neutral in their natural state. But when a glass rod is rubbed with a silk cloth, electrons are shifted from a glass rod to silk cloth. The glass rod is positively charged and the silk fabric is negatively charged as it absorbs additional electrons from the glass rod. In this case, bar after rubbing, comb after running through dry hair becomes electrified and this is an example of frictional electricity.

It is important to remember here that only non-metallic bodies can be charged by friction. The explanation is that the charges are free to travel within the material in a metal or conductor. If you apply a charge to one component of the conductive material, the other charges will be automatically re-arranged to neutralize the charge.

In the case of non-metallic or non-conductors, the charges you put on the surface of the material by rubbing remain as there is no re-arrangement taking place. This is because the insulator charges do not pass freely inside the content.